The Afro-American Historical and Genealogical Society, Inc. (AAHGS) strives to preserve African-ancestored family history, genealogy, and cultural diversity by teaching research techniques and disseminating information throughout the community.  The Central Maryland Chapter (CMC) was the very first chapter to be charted by the national organization.

The chapter goals are to promote scholarly research, professional presentations on research methodologies, and networking with other genealogists. We also sponsor genealogy-related door prizes (e.g. books, genealogy quick sheets, etc.) at our meetings to promote education. We serve as a teaching vehicle to advance African American genealogical & historical research in Maryland and the surrounding area. Our objective is to promote Black History in Maryland, to encourage the historical and genealogical studies of African Americans, and to support the goals and objectives of our national society.

Almost twenty five years ago, a small group of friends in Columbia, Maryland, all of whom were passionate about the study of African American genealogy and history, decided to follow in the footsteps of the founding fathers of the Afro-American Historical and Genealogical Society (AAHGS). They had a vision and formed a nonprofit corporation to work with others in the community to achieve their goals.

The corporation was named “The Central Maryland Chapter of the Afro American Historical and Genealogical Society, Inc.” The Articles of Incorporation (AOI) of the organization, written and signed by Harts M. Brown, Beulah Buckner, Shirley Coursey, and Robert Newman, were approved by the State of Maryland on December 30, 1988. The Central Maryland Chapter (CMC) was the very first chapter to be chartered by AAHGS. According to the AOI, the chapter was dedicated to “encouragement of scholarly studies in both academic, local, and family history of all ethnic groups with particular focus on African-American.” The corporation planned “to promote and publish scholarly research; provide resources for historical and genealogical studies; and create a network of persons of similar interests.” This was a historical milestone for the AAHGS organization. After the charter of CMC, dozens of new chapters and hundreds of new members across the nation were inspired to embrace the vision and also work to foster African American historical and genealogical studies within their own communities.

These CMC pioneers certainly ignited the passions of those in the Central Maryland community about genealogical and historical research. Under the leadership of Sylvia Cooke-Martin, the chapter played an important role in historical research and the restoration of the Ellicott City Colored School in Ellicott City, Maryland in 2001. This one-room schoolhouse, originally constructed in 1880, was the first public school for African American children in Howard County. It remains standing today as a historical site in Howard County, Maryland, and houses a genealogical resource center and a museum chronicling the history of African Americans in Howard County.

In its early years, CMC began sponsoring regular meetings featuring presentations which were open to the Central Maryland community. CMC prepared exhibits and hosted booths at the annual Black History Fair in Columbia, Maryland. A series of genealogy workshops were held at the local library in April 2001, and the members took field trips to research repositories and historical sites.  Unfortunately, the chapter eventually became inactive.

In the fall of 2009, AAHGS member Alice F. Harris was determined to reactivate CMC. After many years of chapter inactivity, she took the first steps in the process to complete the required state legal documents to reactivate the chapter.  In a few months, she accomplished her mission and the newly revived chapter had its first meeting on January 23, 2010. With Alice F. Harris as President and Robyn Smith as Vice President, CMC began to develop new goals and objectives. In addition to holding regular meetings, members of the chapter went to work re-establishing the chapter’s niche as genealogy trailblazers in the community, in particular with regard to African-American genealogy and history. By fostering an atmosphere conducive to learning, as well as ensuring members had fun, networked, and shared information, the interest in CMC grew quickly.  Special public events sponsored by the chapter, such as the Ancestral Libation Ceremony for enslaved ancestors during Black History Month 2011, also contributed to getting CMC back in the spotlight in the community.

At the bimonthly meetings, CMC does skill building exercises or genealogy challenges designed to test the knowledge of participants and to help them learn new information about genealogy. Workshops on the basic genealogy research techniques are held periodically at the local library and mentors are at work assisting new members in getting started with their family history research. Also, Alice Harris and Robyn Smith began teaching African American genealogy classes at the local community college. A CMC blog was launched with information about chapter activities and tips for researching family history. In addition to using other social media, CMC created a photo gallery on the web, to share photos from special chapter events.

Over the past seven years, CMC has provided a number of programs, research trips, and other activities. The chapter sponsors ‘Lunch ‘n Learn’ sessions on research in the various states. Each session includes a brief overview of where to find key state records (vital, land, probate, tax, etc.), provision of state research guides and links to websites, and the opportunity for members to question the experts on their own individual research challenges. The Lunch ‘n Learn sessions have been well-attended. CMC programs and events are complemented by trips to historical sites and local repositories. For example, a tour and lecture by experts at the National Archives in March 2010 focused on “Black Family Research at the National Archives”. CMC members and their families visited the African American Civil War Museum and Monument.

In promoting the original CMC vision to provide resources for historical and genealogical studies, over the years CMC has provided a number of hardcopy and digital brochures, handouts, research guides, fliers, and leaflets with research tools and techniques.  For example, a unique series of one-page case studies called “Busting Brick Walls” have been provided periodically to CMC members. In this series, chapter members document their struggles with real life brick walls and share with others the tactics used to bust those brick walls. Hardcopy handouts and bibliographies are provided at the meetings, and relevant reference books are often placed on display. Genealogy informational updates, announcements on upcoming genealogy events, and summer reading lists are also distributed electronically to CMC members. The titles of a few brochures and other media distributed to CMC members include:

Written by Alice Harris, Past President

We’re virtual during the pandemic! 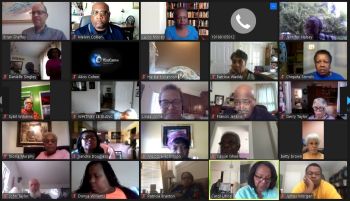